For those who may have visited Israel in the past, this special Israel group tour is designed to show you the heavenly sites a bit more off the beaten track. Spend 7-nights and 8 days on the Holy Land Group Tour from South Africa and explore Druze Village, Haifa, Acre, Safed, Golan Heights, Herodion, Gethsemane and Yad Vashem.

Your tour includes your return flights from Johannesburg, 3 nights in Galilee, 4 nights in Jerusalem, breakfast and dinner daily, touring with an English speaking guide, entrance fees to all sites and more.


Oct 24 – Nov 2, 2020
7 nights / 8 days
A uniquely designed group tour for those who have been to Israel before and wish to explore other sites and areas

This is a really special tour for all those that have been to Israel times before and whish to explore more places. We tour the Galilee, Druz Village, Haifa, Acre, Safed, Golan Heights,  Dead Sea, Herodion, Jerusalem and more …

Depart tonight from ORT Johannesburg on a flight to Israel.

Arrive in Tel Aviv. Travel along the coastal road to Daliat El Carmel Druz village. Enjoy a hospitality and learn about this interesting secretive religious. We travel further north along the coast to the port city of Haifa. Here we see the terraced Baha’i Gardens on Mt. Carmel and learn about the Baha’i faith. Continue to the Crusader city of Acre. Here we tour the Crusader fortress built in the 12th century, the Ottoman structures and a former Turkish and British Mandate citadel prison.


Drive past Cana, site of the first miracle where Jesus turned water to wine. Continue to Nazareth where Jesus spent his childhood. Visit the Church of Annunciation and Joseph’s workplace. Visit Nazareth Village (OPTIONAL not included in the tour rate) and learn about the daily life during Jesus’s times. Go up Mount Precipice (Time permitting) just outside Nazareth, where tradition holds that an angry mob attempted to throw Jesus off the cliff (Luke 4:16-30). From this view, point view Mount Tabor and Gliad Mountains. Continue to the Mukhraka on Mt. Carmel, overlooking the Izrael Valley and the Kishon. The Canaanite inhabitants worshipped Baal and his consort Ishtar who was adopted by the Israelites. Here Elijah the prophet challenged the priests of Baal to prove whose god was more powerful and when he won, the Israelites abandoned the Canaanite deities and the false prophets were slaughtered (1 Kings 18). Drive past (we don’t go in) Megiddo (Armageddon), The bible tells about Joshua defeating the Canaanite king of Megiddo, a city which king Solomon built and the site where kings Ahaziah and Joshia killed here. For Christians, Armageddon is where forces of God will defeat the forces of Evil in the Final Battle at the End Day. Continue to Yardenit Baptismal site in Jordan River for optional Baptism. 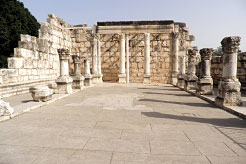 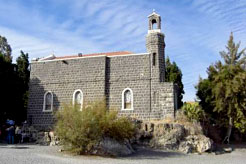 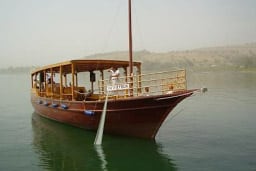 Enjoy a Boat Ride on the Sea of Galilee from Tiberias to Gennosar and hear how Jesus calmed the stormy sea and walked upon these waters. We hold communion and sing on the boat. An emotional and spiritual uplifting experience. At Gennosar OPTIONAL visit to view, an ancient boat from the times of Jesus found under the water and time at a beautiful shop. Visit Peter’s Primacy. Here Jesus met again with the disciples for the “last breakfast” and restored Peter to himself after the disciple’s three denials by asking him three times if Peter loved Jesus. Continue to Capernaum. The Gospel tells about Jesus leaving Nazareth to settle in Capernaum, which became “his own town” and the centre of his activities. From its community of fishermen, he chose many of his disciples (Peter, Andrew, James, John, and Matthew). We ascend the Golan Heights. Drive past Mt. Bental we explore the remaining Syrian bunkers and trenches captured by Israelis in the 1967 Six-Day War. Stop for OPTIONAL lunch at a typical good Middle Eastern restaurant. Go up an observation point overlooking the plains to Syria. Drive to Katzrin (Time permitting) to visit the Golan Antiquities Museum and see archaeological discoveries from the Golan plus a film on the ancient Jewish city of Gamla. 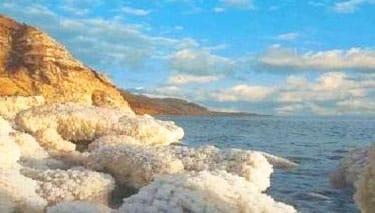 Travel along the Jordan River to Jericho and view Mount of Temptation. Travel past Qumran caves where the Dead Sea scrolls where found. Ascend Masada by cable car. Our guide will take us on a fascinating tour of this mountain where 960 Jewish defenders organized the last resistance to the Roman conquerors. Enjoy a float in the salty waters of the Dead Sea. Ascend Judeah mountains and enter Jerusalem, the “Eternal City” of GOD.


Travel to Herodion. A major archaeological site, home to an impressive palace dating to the time of King Herod. Located about 10km south of Jerusalem, the site was also the burial location of Herod, hence the tumulus shape of the hill. Although Herod was a ruthless leader who represented Rome in Judea between 37BC and 4BC he was also a visionary and responsible for many of Israel’s most architecturally advanced structures which have survived. Visit Bethlehem* to visit Church of Nativity. After dinner we go to David Tower for Night Spectacular show, (OPTIONAL not included in tour rate), telling the history of Jerusalem on the Old City walls. 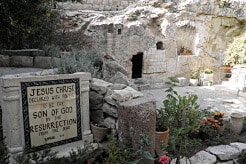 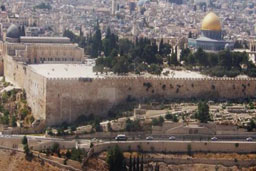 Drive-up Mt. Of Olives. Here overlooking the Temple, Jesus taught his disciples, prophesized the destruction of Jerusalem. From here the entire city of Jerusalem unfolds before us. Walk to Dominus Flevit and continue along Palm Sunday to the Garden of Gethsemane, where Jesus was taken captive. Visit the Western Wall and the Tunnel. Continue to Pools of Bethesda, located north of the temple mount. The pools were probably designed at times Herod the Great for the Jewish inhabitants to purify themselves and here Jesus performed the miracle of healing an infirm man. We next visit Lithostrotos. Take a short walk along Via Dolorosa and get out of Damascus Gate. Go up Mount Zion were to visit the Room of Last Supper where Jesus shared Last Supper with the disciples. The next visit is to St Peter Gallicantu where the house of Caiaphas was where Peter denied Jesus. Then visit the Tomb of David. The last visit today is at Garden Tomb where we will hold a Communion Service.


Free day to explore Jerusalem on your own. So much to see in Jerusalem.


Free time at the Machane Yehuda market. Continue to Yad Vashem memorial for the Jews died in the Holocaust. Continue to Ein Karem home town of John the Baptist and where Jesus’ mother stop to visit her cousin on the way to Bethlehem. Drive to Emek Haelah where David contested Goliath. Travel to Jaffa. Visit the old city and port. Optional fast food (own cost), before going to the airport for a flight home after midnight, arriving Johannesburg following morning (B) 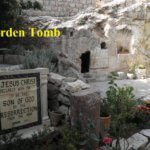